A little over a week ago I left Israel for Kosovo with a unique delegation of 11 high school students: 5 Jewish, 5 Muslim, and 1 Christian. Coming from 9 cities or towns around Israel, many students met for the first time through this trip, but we left as a joint delegation to compete in the Kosovo International Model United Nations conference (KIMUN).

From previous experiences, including leading the first-ever Jewish-Arab MUN youth delegation abroad last year, I expected us to have a good time, and from my previous visit to Kosovo and Albania, I expected us to get a warm reception. But the last week exceeded even my most optimistic hopes.

From the very moment we arrived at Ben Gurion Airport, until the bittersweet end of the trip 6 days later, there was a powerful feeling of camaraderie that affected everyone around us. From security agents at the airport, to fellow passengers who stopped to say how impressed they were, to our wonderful hosts and the many amazing people we met in Kosovo: fellow students; religious leaders; diplomats, dozens of people got to witness what true Jewish-Arab and interfaith friendship can and should look like. Our group of 11 students truly lead by example.

Preparing for the conference 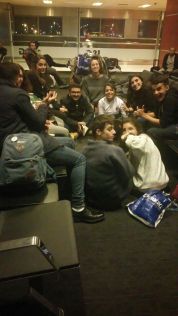 True to our name, we had many great debates and intense discussions. Naturally many people we met were curious to learn more about Israel, and learn they did—with a great diversity of views coming from our group. We had lively discussions on issues of equality and discrimination in Israel; Jerusalem, refugees and other potential negotiation topics; even over security profiling while waiting for our final flight in Istanbul. The different views and backgrounds of participants only enhanced the experience, and as I’ve come to expect from our students, utmost respect and appreciation for one another was shown at all times. In an intense and competitive international trip we faced different kinds of adversity, and students took turns helping one another.

In a trip like this, the differences between people—religious, political, ethnic, don’t disappear. Just the opposite—the deeper the friendships, the more we learn about one another, and even about ourselves. It’s the appreciation for what makes us person unique, and their particular combination of characteristics, backgrounds, and personal views, that brings us all together. The differences in accents between Arabic speakers of different towns, the Tunisian, Romanian, Iraqi heritages, the different perceptions of growing up in the same country–these differences only brought us together and made the group as a whole stronger and more special.

Kosovo, with its strong history of religious tolerance, and more recent efforts to rebuild a sense of national community via democratic and grass-roots institutions after bitter ethno-religio-political conflict, was really the ideal destination for such a delegation. In Prizren I prayed minha (the Jewish afternoon prayer) in a mosque, then we walked down the street, passing Serbian and Albanian orthodox churches before reaching the still under-construction Jewish community center, facing the Roman Catholic cathedral. Within 3 hours we met with the head of the Catholic community in Kosovo, the head of the Jewish community in Kosovo, and the head of the Halveti Sufi order in the Balkans. All unique, all distinct, all Albanian and with admiration for one another. And in Prishtina we heard about Besa—the uniquely Albanian code of honor in which hospitality for those who reach your home trumps any differences, and by which humanity persevered in at least one nation during the Holocaust, with thousands of Jewish refugees saved by Albanian heroes.

Meeting the head of the Jewish community

Meeting the head of the Catholic community

Meeting the head of the Halveti community

I look forward to many such future delegations, and to seeing where our students can take these experiences and how they will incorporate them into their lives, and impart them upon the people they meet. As future leaders, they have incredible potential, and when they work together as a group of diverse young leaders from different backgrounds, they become much more powerful, poised to amplify the influence. Which is good, since they have many lessons to teach the world.