Hi, I’m Eyas, I was born in Israel as a Palestinian, and I am a DFP fellow from Arraba ,north Israel.

On the 15-16th of July we had an overnight Israeli-Palestinian summit held at the Finnish house. So what can we do in a one-night program in Jerusalem?

I had to be in Jerusalem at 11 am therefore I had to wake up at 5 in the morning and travel for 3 hours to get there.

The first order of business we did was the introduction, followed by a discussion about identity, especially the “Israeli Palestinians“ (or whatever you want to call us).

“ I identify myself as a Palestinian who was born in Israel  and it is so important to point out that the term Israeli Arabs is not accurate because I don’t think that the government is representing  us in any way especially after passing the nation-state law. Calling us Israeli Arab  is a way to give up the Palestinian narrative and the fact that we are Palestinians will never change..”
Eyas Asli

After that, we shared many casual conversations over pizza and fuze-tea (it tastes good with pizza😊) sponsored by the Hartman Institute. We kept debating about our connection to the land, memorial days and religion.
For the record, our group consisted of 12 students with very diverse outlooks on the conflict.

One of the most critical elements was our dialogue sessions. We were split into 2 groups with one professional facilitator assigned to each. 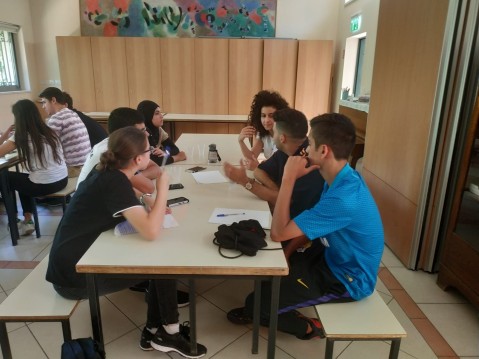 Afterward, my favorite part came; where we walked to the old city, exploring the different quarters. First we went to the Muslim Quarter, and we tried to enter Al-Aqsa mosque but we couldn’t (in that day only Muslims were allowed to enter), then we continued to the Christian Quarter, and we entered the Church of the Holy Sepulcher and saw where Jesus was crucified, it was so peaceful in there, and then it was the time to visit the western wall (the Jewish Quarter). It felt weird to be there but it was a great adventure. After that Steven took us to an authentic Mexican restaurant where we all got to eat some delicious tacos.

Steven is the kind of person everyone respects he doesn’t mince words; he loves every kid who ever joined the program. Steven helped us to get our heads on straight and to realize what a significant opportunity we had at Debate For Peace. 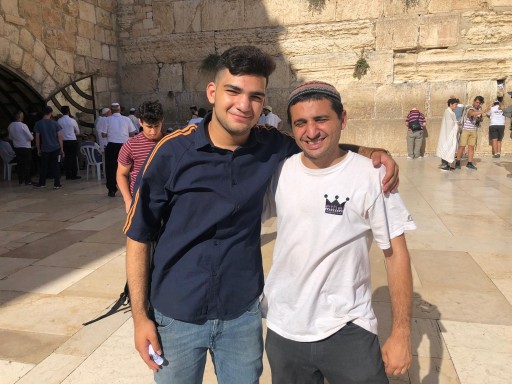 After we got the chance to visit the holy sites. We met a unique author and Storyteller- Yossi Klein Halevi, who wrote,” Letters to My Palestinian Neighbor “and many other awe-inspiring books. He told us about his experience living in Jerusalem. It was very heartwarming to hear him talking about his story and how he feels toward the Palestinians. And after that, we had a Q & A session about his excellent book “Letters to My Palestinian Neighbor ” I recommend it especially for his “neighbors.” 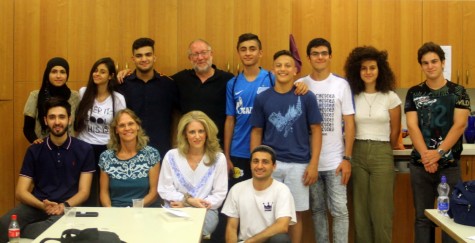 Hockey was the best way to finish the day (yeah right hockey in the middle of Jerusalem)! It was an fun, and it was my first time playing hockey, and I think I killed it. And I am going to go on record and say congratulations to Finland for winning the ice hockey world championship.

At the end of every workshop session, the friendship between us grew stronger and richer. 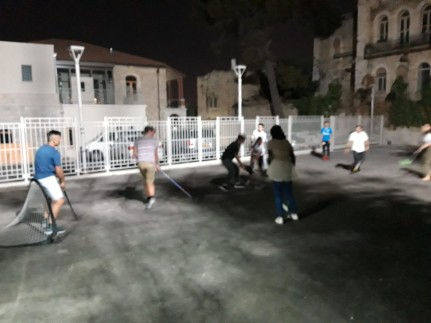 The next day we had hummus and knafeh for breakfast and then it was time for more complex debates and they were basically about the occupation, the Independence Day and “Jewish and Democratic- Paradox,” and after that we were flattered to meet a Palestinian teacher who shared his story with us and told us what is it like to live in a refugee camp.

Towards the end of the workshop, we had the chance to discuss different resolutions for the conflict and how to make peace, followed by a concluding circle.

I am very grateful for the Finnish center and for their hospitality and companionship, and to Yossi, Michal and the Hartman Institute for supporting us. It would not be an exaggeration to say that what we did in one overnight program would’ve been done in a week in other programs.
Thank you, Steven, I am so thankful for what you did for us, Cheers to these long lasting bonds and cheers to this prestigious DFP program.

2 thoughts on “Eyas: Family, Friends, and Fun in Jerusalem”